OH and I had looked up some restaurants before we left for Toulouse and one of the ones that stood out was Le Point D’Ogre, which is located on an easy to miss street off Rue de Metz in Toulouse.

The restaurant, like the majority of French restaurants, doesn’t open until 8pm and we arrived shortly after it opened. Probably because it was a Tuesday night it wasn’t busy and they were happy to seat us without a reservation. The first thing we noticed was the ‘Ogre’ in front of his stone oven ready to grill whatever we ordered. He smiled unfiercely.

The menu wasn’t extensive but did offer duck, beef, salmon and pork and it was explained to us that there was no choice for the starter. I decided on the duck confit and OH just had to have the steak.

As we sat we could see the Ogre take out a huge fillet of beef and cut it into 3 sizable steaks. 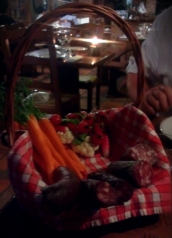 When our starter arrived we were amazed. The waitresses proceeded to place in front of us a beautiful basket with a red and white checked towel in it. On top of that was fresh cauliflower, carrots, radishes and 3 types of sausage. There was also cold carrot and orange soup, bread, some cured ham, ailoli, onion marmalade and tapenade. We also got our own chopping board and sharp knife.

Everything tasted fresh and it all went well together. OH and I crunched and dipped and sliced and spread to our hearts content but I was also wary of eating too much in case I couldn’t manage my main meal and I’d have hated that!

Starter over, I watched on as the Ogre cooked OHs steak on the charcoal grill. It was obvious he was proud of his work and when the large slab of beef had rested to perfection he presented it to OH with a flourish, bowing proudly at his work. We both applauded. 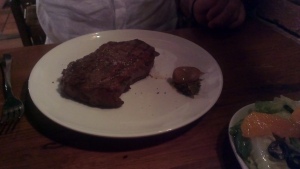 The steak looked magnificent and covered the majority of the plate leaving only a little room for a roasted garlic clove. In a separate plate was an orange and olive salad (OH didn’t want potatoes as he is watching his figure ;p). My duck confit, which ordinarily would have looked fantastic, paled into insignificance next to the mighty piece of beef. It was however excellent and I was glad of my choice, not being a big meat fan. The duck melted in the mouth and was delicious. 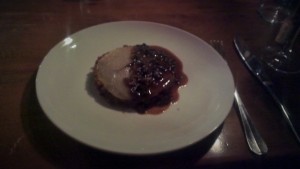 Evidently no longer watching his figure, OH decided to have a dessert and when he queried the profiteroles the waitress disappeared and returned with something that didn’t resemble anything we would recognise as a profiterole but looked eminently better.She then demonstrated it being cut open and filled with cream. OH was sold.

The meal was amazing, the staff were very friendly and the decor was perfect. It was a little pricey compared to our normal budget (the steak was 36€) but considering OH had the best steak of his life I am glad we went that little further and gained the experience and fantastic evening we did.

If you are ever in Toulouse and love steak then make sure you pay Le Point D’Ogre. C’est formidable!