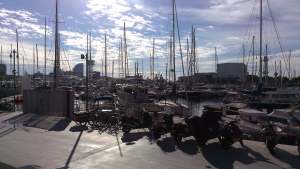 It was in stark contrast to our last meal when we went for lunch at La Gavina, which is in the marina area of Barcelona. We had wandered up and down the quayside first before settling on this restaurant, ensuring we had a good view of all the amazing yachts and checking out all the different menus on display from the numerous waterside restaurants . We eventually settled for La Gavina as it had a set menu that suited us both.

The waiter welcomed us in and seated us in the sun. How glorious it was to be sitting outside in December trying to decide what we would dine on.

Knowing I was about to have seafood I chose us a bottle of Verdejo white wine and it arrived with a basket of bread which we nibbled on as we made our choices. OH, who’d had a bad experience with anchovies earlier on in the week, decided he would start with curried cream of courgette soup with fresh cheese where as I went for Tuna carpaccio with vegetables, ginger and lime vinaigrette.

My tuna was thinly sliced and covered the plate in a beautiful circular pattern with the zesty dressing drizzled over it.

Nestled in the middle was a salad of carrot, lettuce and cherry tomatoes. It tasted fantastic with the lime and ginger not over powering the light tasting fish.

OH’s soup looked good too as it came decorated with fried courgettes, dollops of cream, oil and paprika peppered over it. I had a taste of it and although I liked it, I was glad I had went for the tuna.

For our mains OH had Low-temperature cooked veal cheek with port wine sauce and potato gratin and I chose Swordfish San Sebastian style (with garlic and chili). 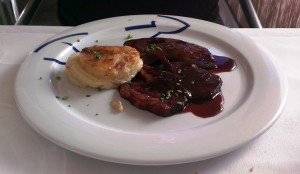 OH’s dish looked rich as the dark red sauce was thick and shiny and clung to the well cooked meat.  He took his time savouring each mouthful.

My swordfish came with carrots and broccoli that had been shown to a hot grill – the charred vegetables were crispy and delicious.

The swordfish wasn’t strong tasting and melted in the mouth and everything was going well until I bit into a chili thinking it was a slice of garlic and my mouth exploded. I actually thought about taking a handful of ice from the ice bucket to soothe my tongue but realised the ice was probably made from undrinkable tap water. The wine didn’t last long after my main course that’s for sure. It was a shame that the course ended on such a disappointing note as I had been enjoying it up until then.

As part of the set menu the only choice of dessert was Catalan Crème Brulee. It’s creamy, smooth texture was welcome on my tongue and its sweetness was a better finish to our meal than the chili. 2 coffees later and we were settling the bill.

Of course, I had to visit the loos and they were lovely, clean and heavily scented. There was a piece cut away from the floor which was covered in glass and displayed a beach scene complete with sand, shells and star fish – very pretty.