Looking for some winter sunshine I looked at Gran Canaria to book a week long getaway. OH and I are not ones for lying on a beach so after much searching decided on an AirBnB apartment in Agaete – a small fishing village on the North West of the island. A long drive away from where the majority of tourists lie starfished in the sand.

We hired a car from the airport and drove anti-clockwise around the round island. We were not disappointed when we were shown around our new home for the week. The view of the mountains and Atlantic was amazing (the wine and beer left in the kitchen for us were also great). After stocking up on some essentials we chilled for the rest of the evening enjoying the first of many amazing sunsets whilst sipping wine and nibbling cheese.

The following day (Sunday) we drove in to the capital of the Gran Canaria, Las Palmas. It was the day of their annual marathon so the city was buzzing. Groups of drummers lined the route, helicopters and motorbikes followed the runners and the locals cheered and clapped as the sweaty athletes sprinted (or limped) past. There is also an old town aspect to the capital, which was definitely prettier on the eye than the new builds and chic shopping centre.

The weather on Monday was perfect for a drive, this time clockwise, down to Maspolomas where we found miles of sand dunes. Imagine the Sahara Desert but with a coast.

There’s a main road, which runs from Agaete round the majority of the island and is the sensible route to take if you’re going anywhere. Additionally, there is also a spiders web of roads, which wander through the middle of the island clinging to the sides of the mountains. These roads are seriously narrow, have sheer drops, crazy hairpin bends and don’t offer the chance to get into 3rd gear too often. However, as well as the near death experiences they offer, they also give you breath taking views. So after a wander over the dunes we drove back to Agaete through the mountains. 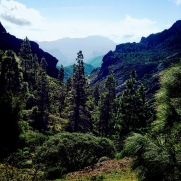 Stopping off at Roque Nublo, a precariously perched volcanic rock and the second highest point in the island.

This drive messed with my hands and nerves giving me white knuckles, sweaty palms and muscle cramps as I tensed at each and every corner (and I wasn’t even driving!) but they also give some amazing views –

the kind of scenes you wouldn’t normally see unless you’re the type that actually enjoys leaving the car behind and trekking up a mountain for hours. Incidentally, the roads were also full of cyclists. Lycra clad mentalists pedalling along the extreme roads, cycling just as fast as the cars could drive.

When I booked the break in Gran Canaria the last thing I was expecting to hear was that I could visit a coffee plantation. Yes! They grow coffee in the Agaete Valley at Finca Los Castaños. This was only a short drive for us but it was still another scenic trip into the valley where we loved the relaxed tasting of their own red, rosé and white wines accompanied with cheese made from cow and goats milk and some pork pate on chunky bread. This was then followed with a lovely cup of the only coffee grown and produced in Europe and some delicious home made cake. This was all enjoyed whilst being surrounded by orange trees, grape vines, coffee plants and lush green mountains. The word you’re looking for right now is bliss.

Our apartment looked over Puerto De Las Nieves making it only a short walk down through a cactus garden and along the coast. The working port boasts a string of fabulous fish restaurants. We could easily have dined in a different place each night and not been disappointed. As the area isn’t full of tourists there were very few menus with photos or waiters trying to coerce us to a table so it was great to wander and choose at will without pressure.

Additionally, the lack of beach seekers meant the meals were reasonably priced and didn’t break the bank at all.

As well as the amazing fish dishes we also managed to eat like cavemen when we dined in a restaurant, which had been carved out of the mountains. Restaurante El Centro Guayadeque The menu was fascinating. Eventually OH decided on a Steer Steak, which, when it arrived, covered the whole plate and looked like at least half of the beast. I had chicken skewers, which I couldn’t finish but wanted to. Both dishes were beautifully flame grilled. Like Fred and Wilma, we ate our meals sitting at a stone table in a cave, which was surprisingly cosy.

I could go on and on and tell you about everything else we did and every meal we ate but I’m already way over my usual word count so will stop now.

So, in summary, a lot of people have preconceived ideas about Gran Canaria. Perhaps thinking it’s just a place to go and lie on the beach. This certainly isn’t the case. Gran Canaria is an absolutely beautiful island, which has something for everyone and even more if you venture off the beaten path. I, for one, wouldn’t hesitate to go back. 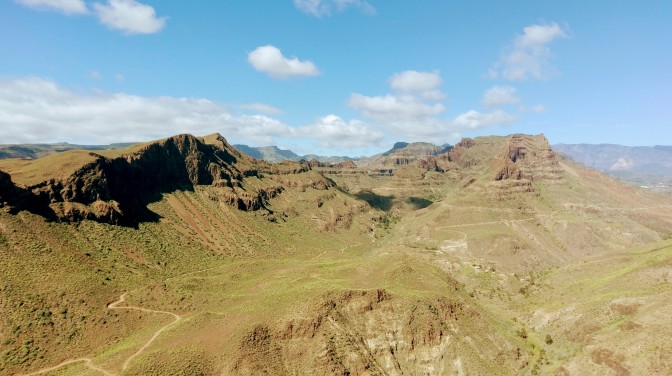