There is a mystical walk you can do if you ever find yourself in Aberfoyle on a clear day.

Doon Hill is on the outskirts of Aberfoyle and said to be home to the fairies. It’s a easy route (I know because I managed it and I hate going up hills) and has some stunning views from the top. It’s not for buggies or wheelchairs but I think most children aged 4 and over could manage it.

When we did the walk we parked in the Woollen Mill car park (at the opposite end from it). We then walked over the stone bridge and along past houses on our right and a couple of snorting pigs on our left. Next on the left is an auld kirk where there is a gravestone for

Pastor Kirk who was fascinated by fairies and folklore. So much so he wrote a book giving away the fairies secrets, which annoyed the fairies so much they kidnapped him and imprisoned his soul in a pine tree on top of Doon Hill.

After the kirk we followed the road round and into the start of the woods. There is a sign that says there is a fairy trail but to be honest it isn’t that well sign posted although further up there are marker posts. We followed our noses and at the bottom of the hill went left and followed a path up. Thankfully I had on my wellies as it was pretty muddy. 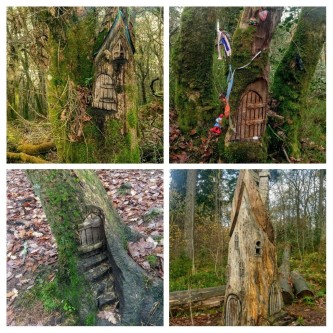 Although you have to watch where you put your feet you should also look out for signs of fairies – there is evidence everywhere.

The climb is steep in bits but nothing too demanding.

On top of the hill you will find the fairy tree

covered in ribbons. In the past it was said if you wrote your ailment on to a cloutie (rag) and tied it to the tree as the words faded so did the ailment. Unfortunately, nowadays though it looks more like just ribbons without writing and plastic tat  on display, which will take forever to fade.

If you wander around the top of the hill you are rewarded with some amazing views.

Next to the path you came up, just to the left, there is alternative route down. This takes you down far quicker and past some more fairy houses. You will know you are on th 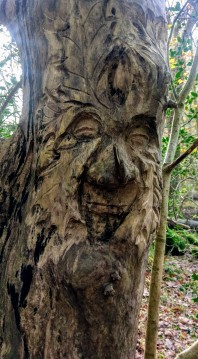 e right path if you see this handsome Green Man smiling at you.

At the bottom of hill we retraced our steps back to the car park. However, there is another route you can you take if you turn left, which circles back in to Aberfoyle following the old railway line and which ends up behind the Woollen Mill. However, we didn’t do that and instead headed straight for a bar lunch in town.