Another Saturday, another lunch out. But where to go? Well yesterday we decided to go for a drive around Loch Lomond and stop at The Inn on Loch Lomond for something to eat. It’s not a hard place to find, if you’re heading North it’s on the left hand side and it is on Loch Lomond. Well, not right on, it is the other side of a fast road but you can still see the Loch. Parking was good and we just walked in and asked for a table for two. First off we were asked if we had a voucher. Eh no. (Damn! I hate it when I miss a trick) and then we were told to sit anywhere. On looking we could see every table was set for 4 and there was an empty one next to the window but it had yet to be cleared so we sat further up. Soon after we were asked for our drinks order and then when they arrived our food order was taken. No messing around. Very smooth service. I have to admit I was a little disappointed in the menu. There were burgers, sandwiches and soup, stuff from the chippy (you can get take-away too), curry of the day, steaks, a couple of veg options but nothing that stood out at all. I ended up having Cauliflower and Leek Macaroni Cheese with crisp leaves and chippy chips. OH decided to have the curry of the day, which was Chicken Balti served with scented rice, poppadum, spiced onions, mango chutney and spinach and plantain bhaji.

We decided, as we waited, that it was a bit chilly where we were sitting (in front of an unlit fire) so we asked to move, which wasn’t a problem at all and soon we were sitting at the window with a cleared and a re-set table.

It wasn’t long  after our food arrived. OH’s looked impressive. However, it wasn’t until he mentioned it, I realised there was no plate to decant the rice and balti in together. He struggled on complaining that using a knife and fork in a bowl doesn’t work. With hindsight we should have asked for a plate as it did hamper his enjoyment of the meal. His only other moan was he missed having a dip for the bhaji.

The good news is he liked that he could taste the chargrilling of the chicken and there were fresh herbs on top (even though he had to dump the rice on top of them). 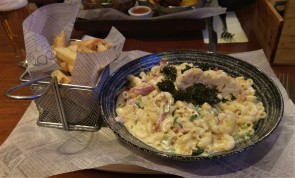 My macaroni was delicious. I had asked for the optional bacon to be added and there was large lumps of gammon in it. I had thought the cauliflower would also be through it but instead there was a large floret on top. The crispy leaves had been fried and scattered over the dish. The chips were indeed chippy chips – I could taste the difference but unfortunately they got cold quick so I left the majority of them to concentrate on the very hot pasta dish, which I knew was gloriously unhealthy for me as it was laden with cream and cheese. It was a little salty probably due to the bacon bits but I really wanted to finish it but couldn’t because it was such a large helping.

After our meal I nipped to the loo. They were tastefully decorated and nice and clean but there was no shelf for my handbag whilst I washed my hands so annoyingly I had to put it on the toilet floor.

Incidentally, I checked the voucher thing out. Itson are doing a voucher for a 2 course lunch for £19 instead of £42, which also means you get a different menu.