Recently, OH had heard the pub in Ladybank was under new management and was now called the Golf Inn. He’d also heard good things about it so we decided to give it a go. When we arrived we were offered a table in the dinning area next to the fire and shown the specials on the board.

The decor was fresh and clean with grey tartan checks and wood. Later when we went into the bar area there was a snug with comfy leather club chairs and a wood burning stove.

We were given menus but the barman/waiter quickly removed the board and told us the soup was now lentil and not tomato, ale and cheese (?) I might be making the cheese bit up but it did have another ingredient. It also (I’m pretty sure) had smoked haddock and chips written under it.

The menu was proper bar lunch stuff. There was a range of starters including Cullen Skink and the mains were Steak pie, fish and chips, pasta, burgers, scampi and chilli. All reasonably priced. The back of the menu was dedicated to pizzas – obviously a speciality.

One of the main reasons we were out for food was that OH wanted a hot bowl of soup to heat him up so he went for the lentil soup followed by steak pie and I decided I would just have the smoked haddock on the specials board, which had now been rubbed out but my order wasn’t questioned.

As soon as the soup arrived OH dived in and I forgot to take a photo so just imagine there are 2 pieces of crusty bread with 2 bits of butter on top in the photo. The soup did not last long so I can assume it was just what the doctor ordered.

When my fish arrived I was a little disappointed to see it was just fish and chips. I had thought by ordering the smoked haddock from the board it would be a tad different but nope it was just fish and chips and when I say just, I mean just. There was no tartare sauce or peas! Saying that though, the dish was great. The batter was crispy, the fish (not smoked) was fresh and the chips were spot on. Yes, I did miss something to mix it up a bit and would have loved some mushy peas but I survived.

OH’s steak pie was laden with large chunks of beef and much to his delight the pie had a bottom, which is maybe why he didn’t complain about getting his pie in a bowl. He did say though, the meat wasn’t chewy and was falling apart in his mouth. In contrast to my dish, he had thousands of peas.

OH ploughed though his half cow in a pie but was now so stuffed he couldn’t manage a pudding but I did notice a blackboard with daily offerings from £3.95.

We went through to the bar area for another round of drinks and in the snug there was a large group of friends with children enjoying pizzas and pints with footy on the box and everyone looked very relaxed and comfortable. Sadly, there was no room in front of the fire but the atmosphere was warm enough.

All in all, service was friendly, food was great and it was exactly what you want when you want a proper bar lunch.

Yesterday OH and I were in St Andrews to do some research for my new book – a murder mystery set in St Andrews (if you’re interested my last book is available to download here The Same Individuals) Anyway, it was lunchtime and I remembered that the West Port Bar had undergone a revamp and had changed its name so we decided to try it out.

We discovered it was now called The Saint. Inside it was still the same layout but there was new fancy wall paper and some lovely lighting. We were sat in an intimate little niche, which would have been great if I wasn’t such a nosey bint and wanted to see what everyone else is eating. Immediately we were offered a jug of water and when the waitress returned with it she asked us if we wanted any other drinks. And when she returned with our drinks she took our order for food. It’s a simple way of attending to a table but it works really well and more restaurants and bars should do this.

The menu was big and had the same old pub food – fish and chips, burgers, scampi and pies but additionally there was duck, salmon and pork chop. To me it was a pretty boring 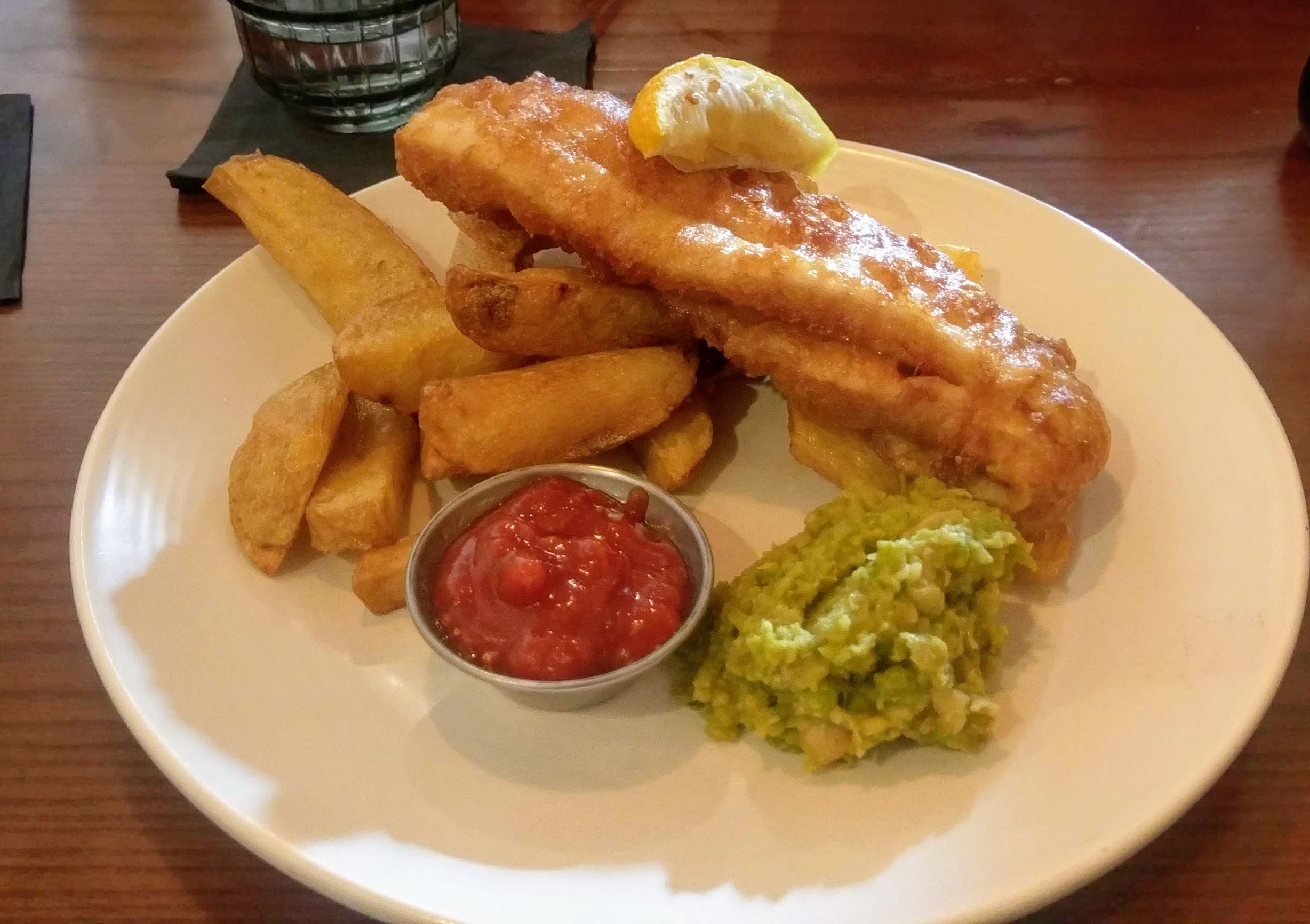 menu and nothing jumped out so I ordered the  fish and chips. However, I asked if I could get some Bloody Mary Ketchup on the side, which was offered with the scampi. It was the only thing that did stand out and I really fancied trying it. The waitress said it wasn’t a problem at all. When my fish arrived I was disappointed not to see tartare sauce as well but as I had asked for ketchup it was justified. Initially, the fish melted in my mouth but then it got a bit greasy. The chips were a big hit, chunky and obviously hand cut. The ketchup wasn’t as spicy as I thought it would have been and lacked any kind of kick. Overall it was an okay plate of food. 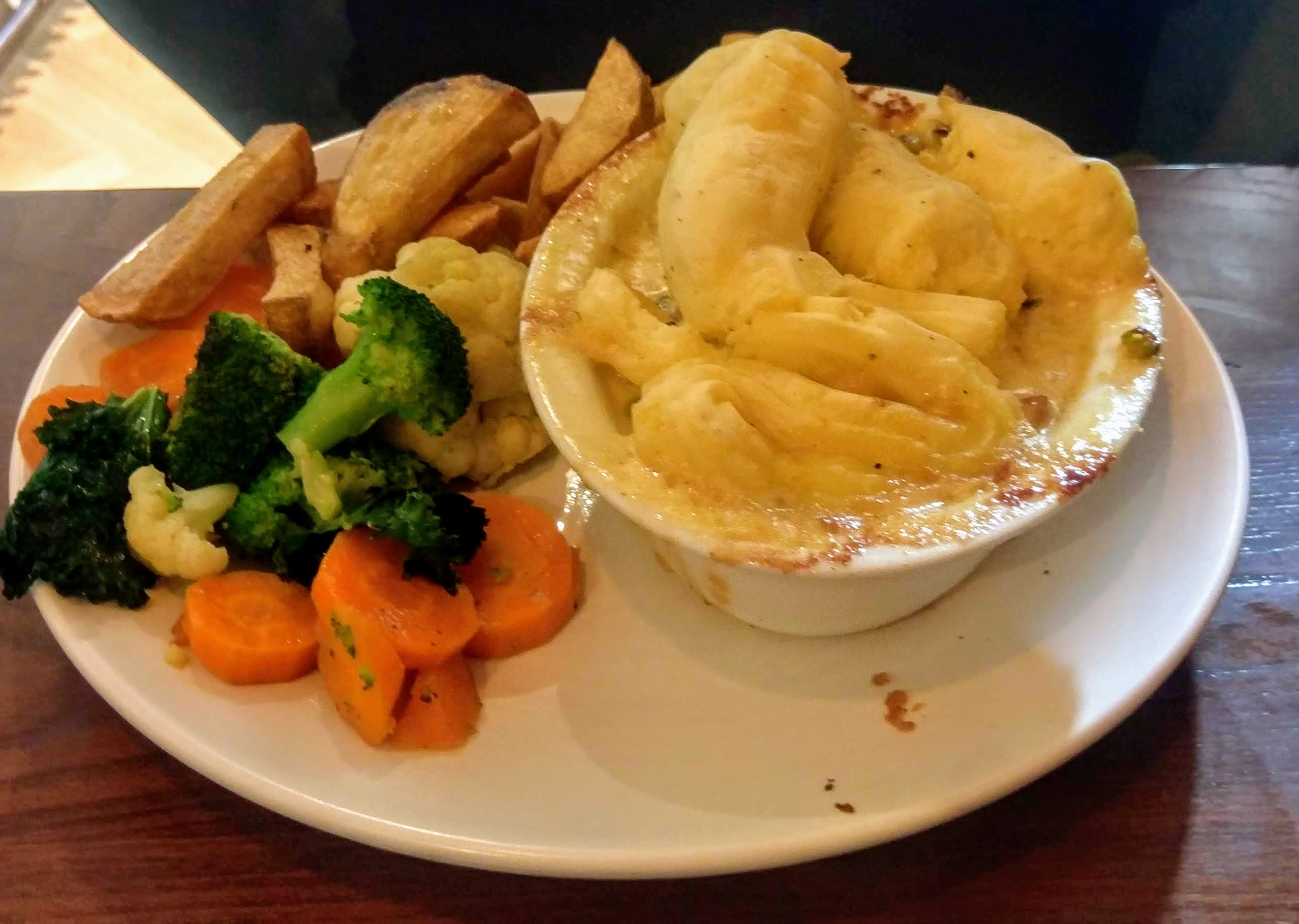 When the pie arrived I could see they hadn’t taken much time in piping the mash on top and had went for the dodding it on method instead. It took ages for OH to eat his pie as it was so hot, which meant he ate all his chips and veg first so there wasn’t a lot of room left for the pie but he battled on regardless. OH said the potatoes on top were dry but this wasn’t a criticism. Inside there was loads of smoked fish within a nice creamy sauce. He enjoyed his pie although he felt completely stuffed after overdosing on carbs.

When we asked for the bill the waitress appeared with it and the card machine at the same time. More service bonus points!

2 mains, 2 pints and a coke = £34 so not the cheapest bar lunch we’ve  had recently but OH did get the opportunity to waddle for the rest of the day and complain he could no longer see his feet.

OH wanted to go to Edinburgh today to buy some fishing and camping gear so after visits to Go Outdoors and the Edinburgh Angling Centre in Granton and spending a small fortune, we needed to find somewhere near by to eat that was not going to break the bank any further.

The Starbank Inn was only a short drive away and there was a parking place right outside the door so that’s where we ended up.

The inn is a Belhaven pub so had  a large 3 folded menu offering all the normal kind of bar food – burgers, fish n chips, pies, pasta etc. On the black board was Cullen Skink soup and Scallops.

I was betwixt and between and wasn’t sure whether to order soup and a sandwich or one of the pies. After ordering our drinks I decided on the

Haggis and Potato Pie – Spicy haggis, layered with neeps and tatties, topped with Cheddar cheese and served with a creamy whisky sauce. When it arrived it was nothing to look at. The vegetables, carrots and courgettes, were bland and tasteless. The whisky sauce was creamy but I’m not sure it had even sat next to a bottle of whisky. When I first cut into the pie there was only potato and turnip with no haggis in sight. It turned out I had started in the wrong corner as the opposite corner was all haggis and no turnip. Unfortunately, rather than there being layers, there were lumps. However, after finding the spicy haggis the pie did get better and I loved the lid of baked cheese even though I did have to chisel it off the plate.

OH had decided on the Chicken Tikka Skewers – Served with tikka masala sauce on a bed of rice, with naan bread, tomato & red onion salad and a yoghurt & mint dressing. I asked him what his thoughts were and he replied – alright, average, middle of the road, could have done with more sauce and it filled a hole. Definitely not high praise. Mind you, he loved the Trade Winds ale that he had 2 pints of.

As usual when pubs have large menus with deals like 2 meals for £11 (not on a Saturday though) you know what you’re getting. Don’t get me wrong. There was nothing wrong with the food it just wasn’t anything special. However, service was special and everyone was friendly, chatty and helpful, which made the Starbank Inn very cheap and cheerful.