Just for something different to do OH and I decided to head to Glasgow for a visit.

As the choice of restaurants can be pretty overwhelming we narrowed our choices by deciding to go French. I did a search through 5pm.co.uk to see what it had to offer and it threw up Le Bistro Beaumartin in Hope Street. Their offer was a 3 course meal for 2 with a bottle of wine for £45, which sounded right up our street.

When we arrived we wondered if the restaurant was actually open as it looked a bit dark. We ventured in and was met by a very friendly waiter. He offered us a seat in the window, which we gladly accepted. It would also have helped the restaurant look busier than it was – there was only one other table that was occupied. Not a great sign.

We were given the set menu and asked if we wanted red or white wine with our meal.

Red, obviously. The menu offered 4 starters but all I could see was French Onion soup. However, OH noticed there were other options and went for the Champignons au Roquefort  – Ragout of mushrooms in a roquefort cream.

When my soup arrived I have to admit I was disappointed.

The last time I had French onion soup was in Nice and I had to prize apart the roasted cheese on the top to get to the soup. In this case the cheese was in a little tin dish next to the soup along with some croutons. I emptied the dishes into the soup and waited for the cheese to melt.

The soup itself was okay but nothing special. OH’s starter looked like whole cup mushrooms covered in a dark cream sauce. He said he would have preferred the mushrooms to have been wild or at least mixed. He enjoyed it though and liked the roquefort sauce, which wasn’t too over powering.

paper, steamed rice, ratatouille, herb oil. It arrived still in the grease-proof paper and foil and looked fantastic. The rice was cooked to perfection, the salmon was lovely and I thoroughly enjoyed it.

OH surprised me by deciding not to have a steak! Instead he went for Supreme de Poulet au

citron – braised chicken supreme in lemon, sun-dried tomato and coriander with steamed couscous. I thought his chicken looked a little pale and he did say it was a bit tasteless. It was still on the bone and he felt it had been plumped up with water as if it was supermarket bought rather than from a reputable butcher. The taste of lemon was slight and not detergenty tasting, which I often think can happen with lemon chicken. He liked the couscous but felt he could have handled more than one sun-dried tomato.

For dessert I chose 2 different sorbets. Pink champagne and raspberry. I could also have chosen lemon but I was glad I hadn’t as the raspberry and pink champagne went well together and was a good finish to my meal. OH had Flamusse aux pommes – warm apple flan,

finished with rum, raisin and creme anglais. He loved it and says it was the best part of his meal.

OH and I have been at a number of French restaurants in Scotland and we’ve often felt like we’ve been whisked away to France for a couple of hours. Unfortunately, neither of us had that feeling when we left Le Bistro Beaumartin. The food was ok but nothing spectacular. The competition for diners is fierce in Glasgow and if they want to stay in the race they’re going to have to up their game.

Today OH and I headed to Perth. We’ve visited Pig’Halle  a few times before and have never been disappointed so when we were thinking of somewhere for lunch today it didn’t take us too long to decide on the French restaurant on South Street. It was busy when we arrived but they still managed to seat us without a reservation.

We were given menus which had both the a la carte and the set lunch menu inside. Unusually, the choices on the set menu also included that day’s specials, which the lovely French version of Will from The Inbetweeners described beautifully to us.

Breaking from the norm, OH and I both ordered the same starter. Personally, I blame him for rushing me into my decision. He had already jumped the gun when French Will poured our water and ordered his boring non-alcoholic beer before I had even had a chance to look at the wine menu. Panic set in and I requested a glass of house red (large obviously – I wasn’t that panicked). Then, as soon as French Will returned with our drinks, he said he was ready to order. That’s when I realised we were both ordering the Pressed Hock Ham Terrine, soused vegetables and toasted sourdough bread to begin with. I then ordered the Herb Crusted Baked Coley fillet with a seafood risotto and shellfish bisque and OH plumped for the Seared skirt steak, shallots confit, baked jumbo mushrooms, boulangeres potatoes, sauce aux 3 poivres.

Unfortunately the plate with the bread, caramalised onions and aioli arrived at the same times as our starters as I’m sure if it had arrived with the water OH wouldn’t have rushed the ordering because he was so hungry.

Anyway, the terrine was good. Nothing overly special but it was done well and had a good texture and firm consistency. I ended up spreading the aioli on the sourdough bread, which was fantastic.

OH’s skirt of steak only came medium rare, which was perfect for him as basically he likes his beef chased through a hot kitchen. He cleared his plate and the only issue he had with the dish was that it was bit too creamy for him. My fish dish came with eyes, tentacles, suckers and shells so not for everyone but I always try to order things I’d never make at home and this plate full of seafood certainly ticked that box, and what a plateful it was! I couldn’t finish it.The crust was the best bit, full of flavour and crunch. The clam was a bit disappointing and too chewy for me but the rest was lovely. I did have to ask for a bowl to put the shells in and I could have done with a finger bowl or wet wipe after peeling the king prawn but nonetheless it was a tasty bowl full of seafood loveliness.

Neither of us had room for a dessert so we passed when the waiter cleared our plates. However, since Oh was having a coffee I had another (small) glass of wine. Disappointingly there was no little bit of sweetness with OH’s coffee that I could steal so I ordered the bill. 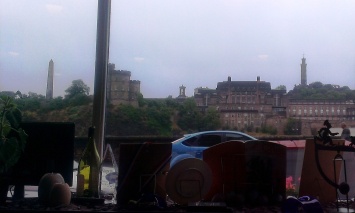 At short notice my niece (now to be known as B’niece), decided to join OH and I on a trip to Edinburgh to soak up the atmosphere of the Fringe. The weather was rotten but we had come well prepared with hats and macs ’n’ sacs.

Lunch had been pre-booked in the French restaurant La Garrigue   as I had thought places may have been busy or booked up as it was the first Saturday of the month long festival. This didn’t seem to be the case so maybe we could have popped in on the off chance but by reserving our seats it meant the French waiter seated us with a great view of Calton Hill.

Especially for August they had ‘Le Menu du Festival’ which invited us to have 2 courses for £14.50 or 3 for £17. We were also told the soup of the day was pea, potato and bean and the fish was coley.

Whilst OH and B’niece studied the food menu I chose a bottle of Syrah, Domaine Condamine Bertrand, 2012 from the wine list. B’niece had said she liked Shiraz so I thought it was a safe pick. When it arrived it turned out to be a great choice and served at exactly the right temperature.

Back to the food though and OH chose Globe artichoke, peas, walnut and Roquetfort salad, I couldn’t resist the sound of the soup and B’niece opted for the Seasonal melon with Bayonne ham, which looked fantastic when it arrived.

OH enjoyed his salad and raved about the creaminess of the Roquetfort although he did mention that he’d have preferred a flat plate instead of the bowl, which became awkward at the end (he made it sound like a bad date – he wanted more but the curves made it tricky to get to what he wanted ;p)

For my main meal I had Fricassee of chicken Basquaise with peppers,

which came with mashed potato.  I’m not a big fan of meat on the bone (no I am not making this sound like a bad date too!)  but this didn’t throw up the usual messy, screechy problems and I had no complaints. B’Niece chose Onion tart with Provencal vegetables and pesto dressing.

You could tell it was homemade and the vegetables turned out to be 3 different peppers and courgettes. B’niece said she’d never have thought about having an onion tart before but now would order it again. OH went for Toulouse Sausage with apple, grapes and potato persillade. 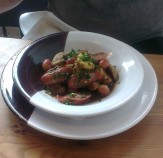 OH loved the appley sausages with plenty of meat in them – he was surprised to find the grapes hot but said it worked really well with the dish.

Although we could have followed on with a choice of desserts – floating island with ice cream, crème caramel with summer berries, apple tart and honey ice cream or a French cheese selection it was a joint decision to finish the wine and head off to see how many leaflets we could pick up on the Royal Mile.

I’d definitely recommend La Garrigue – good food, lovely ambiance and just off the Royal Mile with none of the hustle and bustle of the normally touristy city centre. It has to be said we all enjoyed a lovely meal without feeling rushed, squashed or harassed.

p.s.  OH wants me to say you should pop into the Urbane Art gallery next door as he loved it and was made very welcome.

p.p.s. Following on from a quick straw poll on Twitter I’ve made this 1 of 2 shorter posts rather than 1 long one so look out for what we then went on to see at the Fringe.