Last week Lusa flew over from the states to help me celebrate my upcoming big birthday (it isn’t until the 9th  – but if you want you can send wine at any time). We decided to push the boat out and fly over to Dublin for the weekend as I love it and Lusa has never been before.

Every time I have been in the land of Guinness I have dined at Gallagher’s Boxty House in the Temple Bar area of Dublin and it has never disappointed. I, therefore, booked online well in advance as I knew it would be busy.

When we arrived we were immediately shown to our table in the window where Lusa was able to keep an eye on all the wacky Halloween costumes that were staggering past. The T-rex was my favourite.

We were given 2 menus – the early bird one and the regular one. Wine order taken we  concentrated on the menus. 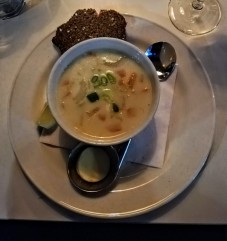 We both ordered the Seafood Chowder Fresh & Smoked Fish in a Potato & Fennel Broth, served with Jack Smyth Stout & Treacle Bread. This was a big hit with Lusa, later in the weekend she said it was one of the best things she had eaten all weekend. I wasn’t so keen on the carrots in it but that’s just me being picky. The bread was, heavy, thick and dark just as you’d expect from  ingredients such as treacle and stout.

For her main Lusa ordered the Vegetable Chilli Boxty (V) Vegetarian Chilli with Mixed Beans and Irish Cheddar, wrapped in a Boxty Pancake and topped with Chive Sour Cream. For the uninitiated a boxty is grated raw potato, cooked mash and flour, kneaded with pure Irish butter and is either baked, slow cooked or boiled. 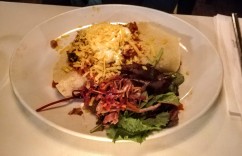 When her meal arrived Lusa had to recheck the menu to ensure she wasn’t eating meat as it tasted so much like normal chilli. Lusa prefers her meals not to look like replica meat but she enjoyed the chilli nonetheless.

I had the Chicken & Smoked Bacon Boxty (ng) Free-range Irish Chicken Fillet in a Creamy Smoked Bacon & Leek Sauce, wrapped in a traditional Leitrim Boxty Pancake.  This was rich, creamy and yummy with big lumps of chicken, crunchy leek and small pieces of bacon in it.  Sadly, it was so filling I had to leave some – probably something to do with eating all the bread with the chowder.

Dessert menus appeared and we decided on liqueur coffees instead of puddings. My Irish coffee with Teeling Whiskey hit the spot and Lusa was enjoying her Baileys coffee when suddenly we were asked to leave as they needed the table.

This surprised us as no-one had told us that there was a time limit on our table. The waiter told us we would have been told when we arrived. Nope, we weren’t. Plus you didn’t tell us when you brought the coffee that we would need to rush them. I even re-checked my confirmation email for a warning – nada.

I nipped to the toilet and returned to find Lusa speaking to the floor manager who was explaining their policy to her. Lusa pointed out as it was their policy that they needed to be managing it better and not surprising it onto customers, she also added that asking people to leave mid meal was plain rude. The response was a verbal shrug. If we had been told at the start it would have made a huge difference so instead and unfortunately, we left with a bad taste in our mouths, which was definitely not from the fabulous food or the beautiful but quickly downed Irish Coffee.