This weekend OH and I visited Bowhouse Food Market in the East Neuk of Fife.

The first time we visited the food weekend we happened upon it by chance and ventured in for the want of something better to do and were immediately enchanted with the large barns full of stalls selling produce all grown and/or made in Fife. This visit however, there didn’t seem to be as many stalls but as the market is now a regular event I’m guessing sellers perhaps choose which weekends they want to attend. 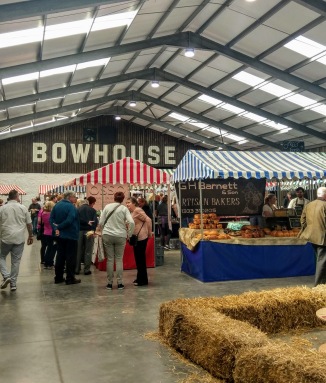 Saying that, there was still a large number of stalls all displaying tempting produce. Flowers, plants, fruit, fish, seafood, cheese, meat, bread, ale, gin, condiments, soap and coffee were all on offer. It isn’t cheap but it’s good quality and it’s always good to support local artisans and to help keep Fife on the food map. The majority of stalls offer free tastings, which always entices the taste buds and often results in sales. We ended up buying a Pumpkin Latte Loaf (£2.50), a lamb, harissa and almond sausage roll (£3), a cheese scone (75p) and a cherry one (75p), a bottle of Gorse Gin (£20), a jar of beetroot and horseradish chutney (£3), a bottle of blonde ale (£3), a small bottle of apple flavoured spirit (£5) and at the butchers I bought some slice sausage and a white pudding (£3). 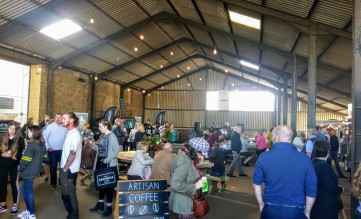 Once you have wandered around the stalls you can then go through to the street food barn where there is even more food and drink on offer. This is where you can grab a St Andrews Brewery Ale, sit on a hay bale to eat some fish and chips or a burger and listen to some live music in a great atmosphere.

There are also some live animals for the kids to meet with pigs and lambs in pens in another area of the farm.

To find Bowhouse drive through Elie and it’s on your left before you get to St Monans. It’s open from 10am till 4pm on a Saturday and Sunday. The rest of the dates for the food weekends are:

I’m hoping the December one will be very festive and will be the thing that puts me in the Christmas spirit.

Friday was market day in Nabeul, the largest market in North Africa and I had signed Mini-me and I up for it, which was all well and good until I went to pay the deposit and was told pick up time was 6.40 am!!!! So much for being on holiday and long lies. To say Mini-me wasn’t happy is an understatement. She was even worse on the  morning of the trip, missing breakfast and nearly missing the bus too. Saying that, I dont think she would have been too unhappy at having to go back to bed. To add to her misery the bus journey ended up being a 2 hour long one. Oopsy. Thank goodness for Ipods.

Our first stop was at a pottery. The tour guide said there were toilets we could use and when I saw 3 other buses parked outside I thought the tourists must be well catered for. Inside, amongst many clay pots, dishes and coloured tiles there was a substantial queue for the 2 toilets. The most surprising thing about this queue was that there were men in it!  The only other time I have seen men queuing for the loo is at music festivals. That’s where as soon as you notice there are no men waiting to use the urinals but you are standing behind 3 waiting patiently for the portaloo you need to switch queues pronto.

Anyway, there was a woman in front of me and we’d waiting for a good 10 minutes. When her turn came she took one look at it and decided she no longer needed. It didn’t bode well but I battled on regardless. To be fair it was bad but it wasn’t that gross I couldn’t use it. After all, I have definitely been in worse at T in the Park 😉

On to the market and we started taking in the sights and smells (not all good). The stalls were highly coloured and inviting so you really wanted to take your time and look more closely but the high pressure salesmen just put you off.  If you slowed down you were captured. “Just 1 dinar –  I show you. Come see. Just look. You Ingleesh? Scotch? I luf scotch whiskeee. Come see I give you Asda price.” Actually, not all were inviting – the shop with the cows head outside didn’t look welcoming at all.

Back on the bus and our next stop was to be a wine tasting. I say wine tasting but it was just really a rabble making a mess and not appreciating anything.  Well come on, you know I like my wine.   My fellow tourists had ate all the nibbles before the wine bottles were even open and the majority thought the sweet rose wine was the nicest. Eh?

What was good though was I was shown how to eat harissa. I’ve only ever used it to cook with before and didn’t think of using it as a spread on a chunk of bread and then drizzling some olive oil over it. Now that was far nicer than the sweet rose wine, which made my mouth look like a cat’s ass! As I was disgusted to see how much red wine was left behind on the table I made sure I had another couple of glasses before I left ;).

Back on the bus and we headed to the Citron Golf  Club for an outdoor late lunch on the lawn, which was lovely as it was all white tablecloths and silverware. Unfortunately, it felt a bit like we had gate-crashed a wedding but I didn’t let the distasteful looks from the old men in their Pringle polo shirts put me off my food too much.

Full of chicken, pasta and salad it wasn’t long before we were heading back to our hotel. The bus journey really let us see the other side of Tunisia where there isn’t all inclusive food and drink but instead building sites, half finished hotels and apartments, acres of olive trees with rubbish strewn alongside, dusty streets with men sitting outside cafes looking just as dusty.  It was a stark comparison to the golf club.  However, one shop sign did make me smile as the owners translation into English said exactly what he sells “PIECES FOR VEHICLES”.

There was only one place I wanted to go for breakfast in Cork and that was the English Market, a roofed food market situated in the heart of the city (just look for one of the many signs that post the way). We had already walked through it the day before but I wanted to go back to sample some of the wares on show.

Although the market has been

around since 1788 it only became known as the English Market to distinguish it from St Peter’s Market or the “Irish Market”(which no longer exists) when the local government reformed in 1840.  It’s owned by Cork City Council and is one of the oldest municipal market of it’s kind in the world and it’s amazing!

When you walk in the first thing that hits you are the fresh smells. You know you’re in a
food market! I reckon nowadays if you were blindfolded and left in the likes of Asda or Sainsbury you would struggle to find the fruit and veg aisle because the produce no longer holds the same fresh aromas that they used it. This most definitely isn’t the case in the English Market as your senses are assailed around every corner. My eyes widened at the choice of ingredients available. In the butchery area there were things on display I would have no idea how to cook but it didn’t stop me wanting to get my purse out. Every part of the pig, bar the squeak, was available to buy, tiny lamb’s tongues (yes I know, aww and ewww), every kind of offal possible and all the normal butcher’s cuts but covered in

diffe
rent herbs or spices or already marinated in some sticky brown substance. The fruit and veg stalls were highly coloured, smelled amazing and again offered produce I had never seen before. The fish stalls boasted fish bigger than me and a fishmonger
that
had been to the palace to meet the queen and don’t get me started on the bakery section! I was like a Bisto Kid as I walked past admiring all the breads, rolls and pastries. Just mmmmm. There were deli’s, confectioneries and poultry sections as well as stalls dedicated to eggs, tripe, sausages, and olives. If I lived nearby I’d be in the market everyday trying to decide what I could have for dinner that night and supermarket shopping would quickly become a thing of the past.

Upstairs, with a view of the market below, is Farmgate Restaurant. Their menu is dictated by the food stalls and they say the market is their larder. Where else could we have breakfast? I ordered a glass of freshly squeez

ed orange and a bacon blaa (a square shaped bap/bread roll associated with Waterford). OH had a pot of tea and the Blaa Special – egg, bacon and sausage.

I switched to buying smoked bacon a while ago as I felt I could no longer taste back bacon. This certainly wasn’t the case with the bacon from the market. It was thick, flavoursome and most of all it tasted of pig. It came with a little dish of tomato relish and some pickled cucumber. Everything just worked. My only complaint was that there wasn’t enough orange juice – especially when OH’s teapot seemed never-ending. As I was eating my blaa I watched the waiter, an Irish James McAvoy lookal

ike, make teabags. He’d bring down a jar of dried green leaves, spoon some of them into a small mesh paper bag and repeat until the jar was almost empty. He’d then replace the jar and bring down another.  I was mesmerised.

Breakfast was expensive but I think, considering the view, the bacon and the whole market feel, it was worth it.

Just to make sure I wasn’t being biased I asked OH what he thought of his breakfast blaa. He replied that he enjoyed it but the sausages kept coming back on him.  I then told him my opinion on the Farmgate restaurant and he countered that the view in The Sextant the day before had been better.

“What all the old men sitting at the bar?”

“No, the waitress, she was gorgeous.”